On Tuesday 18th December Primary 4 completed their Shared Education project with a Celebration Day at Armagh City Hotel. The children were able to showcase to parents, family, friends, school governors and principals all the fantastic work they had been doing. We were joined by Mary and Ian from All Set and Grainne and James from the AMMA Centre.  The Lithuanian dance and the Clap dance were demonstrated during the programme.  The Scratch Junior WW2 levelled games were explained and there was great fun showing the spheros. 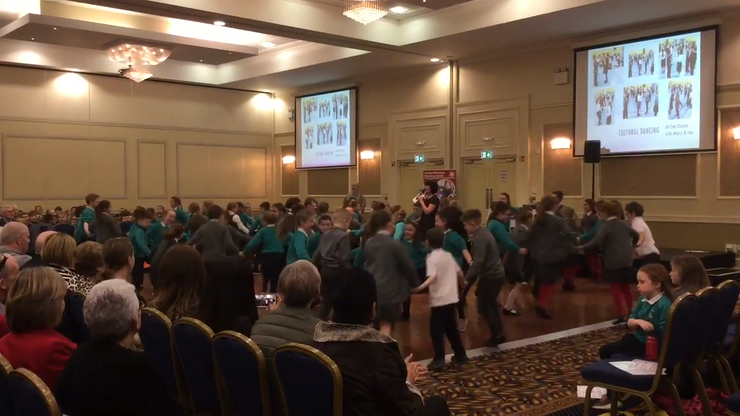 Following on from the successful launch of the Shared Education programme last year, Hardy Memorial and St Patrick's have continued this year to strengthen their strong partnership.  The P4 classes from both schools gathered on Friday 19th October in Richhill Recreation Centre to begin their 8 week programme which involves cultural dance and ICT.  Throughout all sessions pupils will develop friendships established last year and make new friends whilst engaging in the traditional arts programme.  With AMMA support children will also be given the opportunity to use Spheros and Scratch Junior.

Below are some photos from our first joint session on Friday 19th October.

P4M met up with St Patricks in the AMMA centre, Armagh on Thursday 25th October. Both schools brought along fabulous backgrounds which the children had drawn and painted.  The scenes were linked to WW2 countryside, railway, Blitz and VE Day.
Scratch Junior was used to create a levelled game. Photographs of the backgrounds were taken in the app.  Sprites were edited within the app and others were drawn. The children thoroughly enjoyed creating and helping each other to code. Great progress was made and we look forward to returning to AMMA to complete this part of the project on Thursday 15th November.
Great fun was had with the Spheros. The room was set up like a battle field and one group were the Axis Powers and others were the Allies.  The Spheros were controlled using the iPad. There was definitely a battle! Great skill starting to be shown.
On Thursday 8th November P4M met up with St Patrick’s at Richhill Recreation Centre for dance with Mary and Ian.  We had a fabulous day and we remembered lots about each other.
P4M met up with their friends from St Patrick’s on a Thursday 15th November in the AMMA Centre, Armagh.  They completed their WW2 Scratch Junior two levelled game. Their projects are absolutely fabulous.  There will be an opportunity to view some of them at our Celebration Day on Tuesday 18th December.  There was also a tense battle with the spheros.  The Axis Powers fought the Allied Powers in a very close battle with plenty of excitement.
On Thursday 22nd November we were back at Richhill Recreation Centre with our friends from St Patricks. We continued to develop our skills.  Mary taught us more of the Clap dance and the Lithuanian dance. We even started to learn a song. We are now really good at the ‘Name Game’ and remembering the six things we have learnt about our partners. 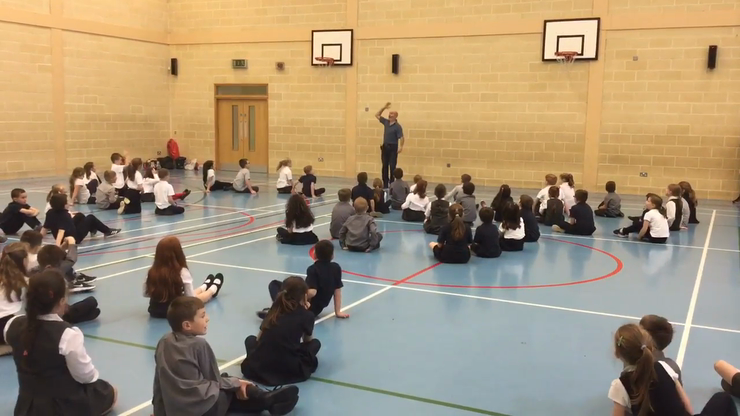 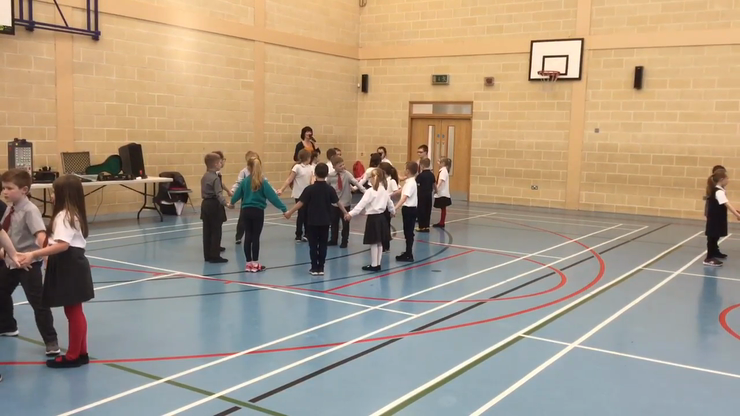 As part of their Shared Education experience P4 had the opportunity to dress up and imagine they were an evacuee during the World War 2 period.  Green Screen was used to make it look like the children had lived during World War 2.

Can you spot anyone you know?

P4M travelled to St Patrick's on Tuesday 27th November. The children were all dressed as evacuees.  Once again they worked in their three groups and the sessions were led by Mrs Duffy, Mrs Smyth and Mrs McClughan.  They worked on WW2 themed PE, science investigations on how far planes could fly and collaborative art based on The Blitz, countryside, railway and VE Day.  It was a super day!
On Thursday 29th November P4M met up for the last day with St Patrick's before our Celebration Day. We were in Richhill Recreation Centre with Mary and Ian. We have all learnt so much and both Mary and Ian were so delighted with our progress and how well we had all listened. We thoroughly enjoyed learning the Lithuanian dance and the Clap dance.